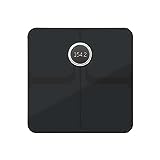 Fitbit is the all-inclusive developer for your fitness needs. Apart from the creation of wearable fitness trackers, it developed the Fitbit Aria smart scale to help you shed some pounds. You can measure your weight, BMI and body fat ratio and wirelessly sync the data to your mobile app. For best results, it’s recommended to use the Fitbit wearable trackers.

Our Verdict: Compared to the Nokia Body Cardio, Aria 2 supports more specs despite its lower price tag. You can link up to 8 profiles with the device. If you need a family weigh-in machine, then it will best work for you. This smart scale will complement your health and fitness efforts if you’re already a member of the Fitbit family. Sync your Aria 2 to your phone app and your fitness tracker for best results.

Fitbit Aria 2 Smart Scale is an improvement on the original Aria Smart Scale that was developed a few years back. However, it has not advanced as much compared to its predecessor. It has just been designed to be more accurate and have a clear interface. It needs an app for setup and data sync, just like other smart scales.

Setting the Aria 2 to the Fitbit app should be relatively straightforward. The app is available for download both on the App Store and Google Store. To use, install the app, wait for the scale to be picked up, read and follow the on-screen cues, and tether to your Wi-Fi connection.

To weigh, you have to be barefoot to allow the measurement of BMI and body fat.

Who is this for?

Although Aria 2 is so tech-oriented, it is for everyone’s use. It may be challenging to set up for tech amateurs, but in the long run, you’ll learn to use and track your data. All the user requires is a smartphone with a Fitbit app to sync data. However, you can use it without the app but you won’t be able to access fitness history.

The Aria 2 smart scale comes with the AA batteries, a user manual and the smart scale itself (in black or chic white). It’s a true replica of what you order. The only assembly to get it running is putting the batteries. Then proceed to sync your smartphone app to the device.

The Aria 2 supports up to 8 users for one account. Therefore, for family use, it’s the best you can acquire. Additionally, guest users can measure themselves, but their data is not stored. The weight limit is 400lbs. It uses four AA batteries that can last up to a year with normal use.

The setup process is not complicated compared to other smart scales. It requires a mobile app like other Fitbit devices. Before the upgrade, users used to sync devices over browsers. Thanks to app integration, it’s simple to integrate and use.

You should the smart scale while barefoot. It can’t measure your body weight percentage if you’re wearing shoes or socks. Compared to Aria Air, Aria 2 has a firmer grip during measurement. It’s advisable to weigh yourself in the morning after taking a shower. Just ensure you dry your feet first.

The backlit display makes things easier to read. There are caution signs on the device requiring to be followed. For instance, pregnant mothers are limited from using the machine.

Following the upgrade to Wi-Fi connectivity, Aria 2 sync with Fitbit cloud to integrate data to your other Fitbit devices. It ensures that historical data is available, whether accessing through browser or Fitbit app.

How to Use Fitbit Aria 2 Smart Scale

Fitbit Aria 2 Smart Scale is geared to providing a healthy living to users. Using the Fitbit app, you can set fitness targets. Aria 2, can generate body data and track your progress. Its effectiveness boosts your confidence.

Using Aria 2 is quite easy. Start by setting up a primary account after installing the Fitbit app. Proceed to create user profiles by using the Aria 2 smart scale. That means inputting user name, age, gender and height. Then edit your user profile avatar on the app.

Your data is automatically updated on your profile, considering your historical record. It means that it doesn’t require manual input at any time.

When you weigh yourself, the scales will automatically upload the weight to your Fitbit profile.

Fitbit Aria 2 is a highly featured and result oriented smart scale. Its display is way better and visible in any condition. On the LCD, you can read weight, body fat and confirmation for data upload to Fitbit cloud account. It’s also easy to use with Fitbit trackers.

Another alternative is the Nokia Body Cardio scale. It supports more body conditions such as water and bone mass, weather forecast and heart rate.

Fitbit Aria 2 is an attractive looking scale that can be used by both expert fitness enthusiasts and people looking to lose weight. It features more advanced specs you would get from a more expensive smart scale. Its ease of usability allows new users to understand their features quickly. When paired with the Fitbit app, it can track up to 8 users. Aria 2 Smart Scale is worth the cost if you’re already a Fitbit user.

Find out more or adjust your settings.